It is a good idea to walk around in the sunlight to help adjust to jet lag.  I had plenty of both today.  I walked along rue de Rome with first the views of the trains running in the trench to and from Gare St. Lazare, then past the musical instrument repair and sales shops.
A big surprise was an old Paris bus which was parked on the street near the Rome metro station on Batignolles at Rome.  It looked to be in good condition.  It had the rear platform by which people entered and left.  An old lady walking by stopped and smiled - she said to me, in French "That brings back a lot of memories". 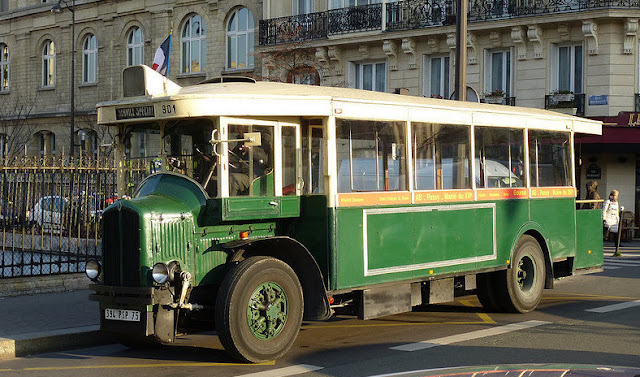 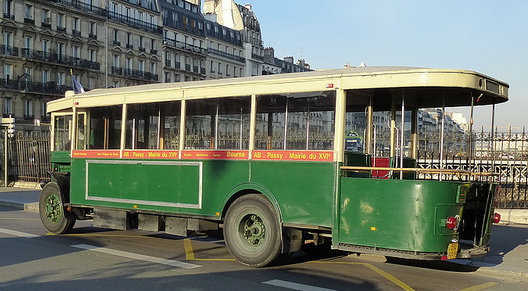 An amazing improvement at the Gare St. Lazare is the Vie du Rail shop which sells specialist railway books, dvds etc.  It was previously hidden in the rue de Milan close by.  The last time I was there I couldn't find it.  Railway histories, picture books, gradient profiles, equipment information - it is all there and there is a G scale train running around under the ceiling.
My first stop after the station was Au Pullman on rue d'Amsterdam where I found the Rivarossi cars Martin is looking for.  There are five other model shops close by on rue de Douai which cater to different scales while one handles with bric a brac.

After a lunch of baguette and cheese (Epoise, Basques and Mimoulette) washed down by a red Cheverny we went for a short walk through the Square des Batignoles and then on to the parc/playground across rue Cardinet.

Dinner this evening was at Le Pet't Canon.  We had a reservation for 1900 but the place filled up from 1930 on.  We had a table by the window where we could watch people walking by, some with Christmas trees and a couple on scooters.  The meal was very good but the portions were very large.
Mary: Pickled herring with potatoes and salad then beef and carrot stew.
Colin: Millefeuille de foie gras then confit de canard with thinly sliced roast potatoes.
50 cl of Chinon (Loire)was a happy choice of wine - full bodied red with lots of flavor but not heavy.
People who come here are very friendly.  An Englishman came in on his own.  He didn't speak much French but very quickly the man next to him was chatting away.  The waiter tried to explain "jarrette" which is Shank.  In the end he put his foot on a chair, raised his trouser leg and pointed to his shank.  At the next table to us were two young women, one was celebrating her 22nd birthday.  The waiter was all over her, probably trying to get her phone number.
Posted by Colin Churcher at 9:47 AM