Thursday 20 December - Dijon in the rain

The weather forecast was bad this morning but we had TGV tickets for a round trip to Dijon so we went anyway.  Metro line 14 brought us quickly to the Gare de Lyon in good time for the 0823 Lyria service to Zurich, first stop Dijon.  It was one of the fairly new double deck trains which was quite comfortable but a little cramped and with little luggage space.  It was dark with low clouds when we left and stayed that way all day.  Several streams along the route had broken their banks and there was extensive flooding in many parts. The weather could only be described as filthy.

At Dijon we found the Tourist Office in the station complex which includes SNCF, local buses and the new tramway.  Armed with maps we set off in the rain.  The city has set out a tourist walking route with nicely cast yellow metal arrows set in the sidewalks.  These are very close together (every couple of metres or so) and show which crosswalks to use.  A larger cast metal plate (about 15 inches) square is placed at locations where one should pause to view the sights.

Dijon has a great number of interesting historic buildings and it was a great shame that we couldn't enjoy them properly in the rain. 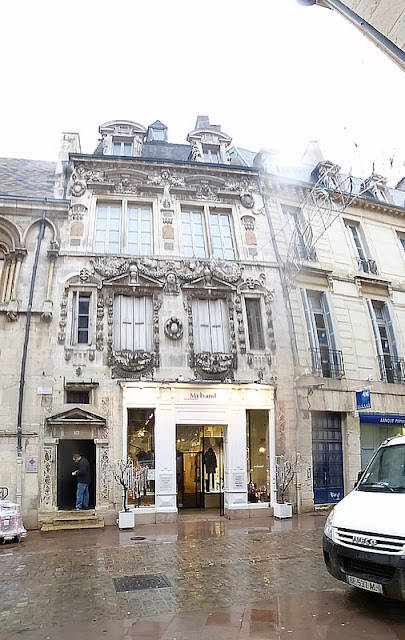 We continued on our walk but the rains was as heavy as ever and we eventually said "bugrit" and decided to ride the trams - at least they would be warm and dry.  The ticket machine would not accept our credit cards supposedly because they were not on a French bank and would only accept coins. We took the tram on line T1 all the way out from the station to Quetigny Centre and then back again.

I am informed by my color consultant that the trams are painted fuschia which seems to be the color chosen by the city.  All city uniforms use this color while the buses and vehicles as well as crash barriers etc. are all painted fuschia.

Coming back to Paris we had reservations on a TGV from Mulhouse.  This turned out to be a surprise.  TGV set 25 is one of the first series of TGVs built in the late 1970s but it has been nicely renovated and there is much more room than in the later double deck versions.  Plenty of space for luggage.

Our return to Paris was pleasant and on time.  Thus ended a soggy day.
Click below to see all pitcures taken of Dijon trams

Click below to see all pictures taken at Dijon

Posted by Colin Churcher at 4:31 AM