I decided to go to Longueville to visit the roundhouse run by AJECTA which has the largest collection of steam locomotives outside Mulhouse.  I bought a 5 zone mobilis ticket and took metro line 2 to Barbes Rochechouart.  Line 2 has the newest, most comfortable trains but it seems to have more than its share of beggars and performers.  Today it was a barefooted unintelligible man who crawled and crouched his way through the train.  Yesterday it was a violin and guitar duo who murdered some Christmas carols and finished up with a sickening rendition of Guantanamera. A couple of days ago it was a Muslim woman who had a baby (probably drugged) latched on to her bare breast.  Until recently these people used to infest line 4 through Gare du Nord but the attraction of the new line 2 trains is that, with the continuous corridor connections, they can work the entire train without having to hop off and back on again.

I arrived at Longueville and spoke to the Engineer who told me that the changeover between traction modes takes place at 140 kmph.  He liked these trains and took the time to point out that they were Canadian - built by Bombardier.  My arrival little more than an hour before the Musee opened gave me me a chance to look around.  There's not a great deal in the place - two boulangeries, two cafe-bars and a charcuterie and everything else was pretty much boarded up, including a pretty large foundry or metal working factory.  However, the Mairie was a large, well-kept building and all the road markings were well painted and quite recent. There is an impressive viaduct on the approach from Paris. 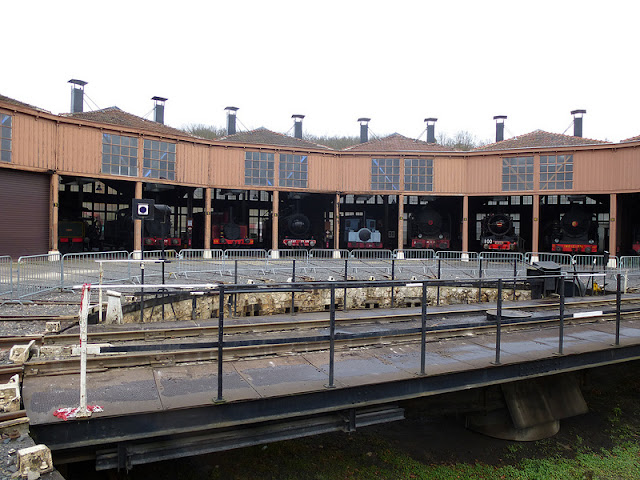 The steam locomotives are all kept in the roundhouse which protects them from the weather.  One group of stalls has been turned into a workshop and the public does not have access to this area. The only working steam locomotive, a tank engine, was in there - it had been lifted for axle repairs.  This work has to be sent away.
The Musee is interesting but it seems that the society is severely underfunded and there are many more restoration projects than they can handle.
The train ride back was uneventful.  An interesting day. Back in Paris, I returned to the apartment via, Porte D'Orleans, Porte de Versailles and T2 tramway to La Defence.  A great use of a mobilis ticket.

Posted by Colin Churcher at 2:23 PM