It was still pretty wet and miserable when we boarded the X2000 fast train to Goteborg this morning.  The country is generally flat and uninteresting.  There is quite a bit of farming but logging is pretty important.  Even the knife, fork and spoon used for the first class breakfast  were made of wood.  I saw just one field of bright yellow rapeseed but other grains were also evident.  As we approached Goteborg many fields were flooded but the sun broke out.  By the time we arrived it was pretty hot indeed.  The hotel is just across the street from the station and our first stop was to clear up the details of the seat reservations for our journey to Oslo tomorrow.  The plaza in front of the hotel is a pedestrian area with trains.  It is rare that there isn't a tram on one of the platforms.  Goteborg is built on mud and is at sea level so a metro system is impracticable.  Trams and buses are used instead.  There are three main types of tram.
- Single cars with separate diamond pantographs which are normally run in pairs
- three unit articulated sets with a low floor centre section.  Usually these have the modern pantograph.
- newer five unit sets, all with the modern pantograph.
The trams are single ended and have doors on one side only.
There would appear to be a tourist tram service but it wasn't running at the moment.

Click below to see all pictures of Goteborg trams
There don't seem to be any rules as to how one crossed the street here.  People just wander across and there seem to be very few official crosswalks.  The area by the hotel and the tram stop is chaotic but the trams seem to be able to avoid hitting people.

We went to the tourist bureau then caught the 1300 canal  boat tour.  The guide told us that a couple of the bridges are so low that we were going to have to lie on the floor.  I thought he was joking - he wasn't.  On two of the bridges we had to kneel on the floor.  The tour was interesting because we were able to see some of the large vessels moored in the river.  They have a very large dry dock which was impressive to see up close. 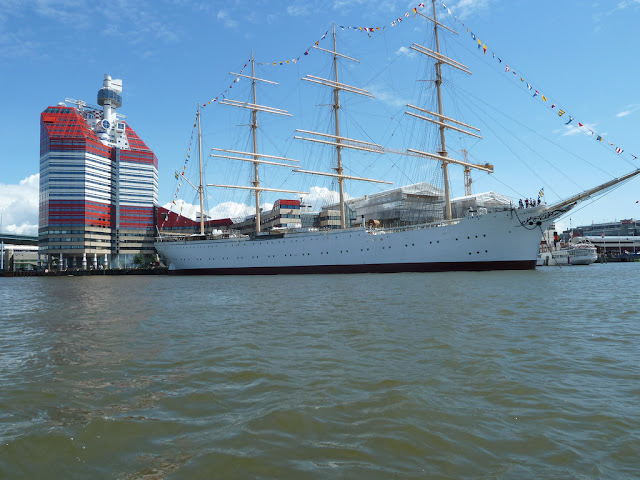 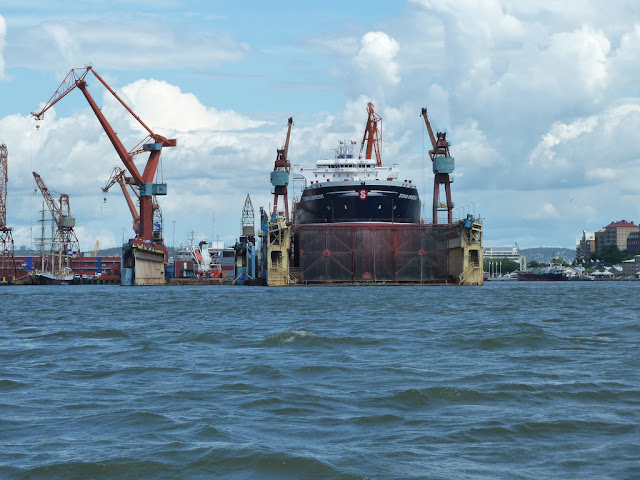 After the boat tour we walked down to the fish market which looks very much like a church.  We had a good meal, starting with three types of pickled herring. 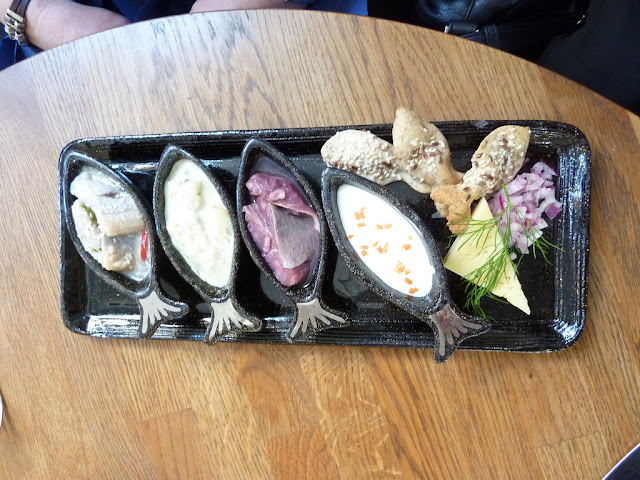 The Haga is a newly restored quarter which has a maritime feel about it.  The buildings are clean and pleasant.  Sitting on the canal bank we were surprised to see one of the tour boats filled up with an orchestra, complete with conductor, all in a blue uniform.  Wonder how they managed under the low clearance bridges.  The formal gardens, looked after by they Goteborg Garden Society are beautiful, especially after all that rain.

We walked through the train and bus station (great integration) and then through the largest shopping mall in northern Europe (ugh!) to the water front.  The "Lego Tower" is impressive up close but I am not sure I like it.  The large sailing ship moored next to it is a floating hotel/restaurant.  It is now marooned here because the city built a bridge downstream of it and the masts will not clear.  Some kids were going round an obstacle course on Segways.

Many of the streets have continuous multi-storey buildings on either side without any street furniture or trees or anything of interest.  We saw this in the Haga and found it elsewhere.  This gives the city an unfriendly, brutal impression.  I presume there are courtyards inside otherwise the area is pretty grim. Mary described these streets as canyons.

Click below to see all pictures of Sweden Railways