At the DSB ticket office I asked for tickets for Roskilde and return.  The lady sold us an all zones 24 hour pass.  With this we were able to go to Roskilde and back then to Helsingor and finally we took a short trip in Copenhagen itself including the new automatic subway.

A short train ride brought us to Roskilde this morning.  The tourist office provided a very useful map and we used it to walk by the cathedral to the Viking Ship Museum.

We arrived at the ticket office just in time to go on the first of the Viking ship rides.  When the captain gave us our instructions it was clear that we were expected to do some rowing.  The captain spoke to the Danes to ask if they understood English then spoke in English for the rest of the time - for our benefit.
Back at the station we quickly found a train back to Copenhagen only to discover that the trains to Helsingor were backed up.  We caught the next one which was turned back at the station before Helsingor (Snekkersten).  We had only to wait a couple of minutes for a cross platform transfer into the train from Hillerod.  Helsingor was dead on Saturday afternoon and bearing in mind the rain and thunder we decided to take an early train back to Copenhagen.
Our zone tickets were still good so we took the S-tog to Norrport and transferred to the metro to Kongens Nytorv.  The platforms have barriers with full doors.  A very impressive system.  We had a drink at a pub that was established in 1723 and then walked along the tourist strip to find somewhere to eat.  We decided to eat inside as it was spitting with rain.  There were plenty of people outside sitting on the sidewalk drinking prodigious amounts of beer.
Mary had an avocado and chicken salad while I had a plate of three types of open face sandwiches (beef with horseradish, fried fish and egg, shrimp and caviar).
For dessert we had waffle cones with ice cream and wandered along the street looking at the lightship then admiring the view from the canal bridge. 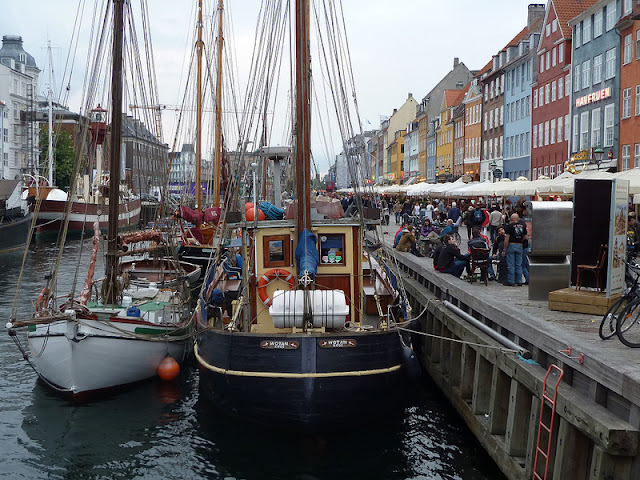