The Air Canada flight to Frankfurt wasn't very good.  The crew had great difficulty in smiling and I felt quite cramped.  We were late in arriving at Frankfurt and it took 15 minutes to taxi in.  It was like being on a plane moving down a country lane.  Then we had to get a bus to the terminal.  Even so we had plenty of time to make the connection to Copenhagen.  Our bags made it in good time and I bought a DSB ticket to get us into town.  The electric trains are fast, comfortable and quiet.  The ride is excellent because the rails are all welded and the announcements, both visual and audible, mean that you cannot get lost.

We chose a hotel which was close to the station and walked there in about five minutes.  The buildings in this area are mainly built of brick.  I don't suppose there is much stone available in this area.

After a short rest we went back to the station to get our rail pass validated and I bought a local sim card for the smart phone.  Significantly cheaper than in Canada.

This part of Copenhagen seems well worn and a little run down.  We walked along to see City Hall and the statue of Hans Christian Anderson then bought some food and called it quits for the day. 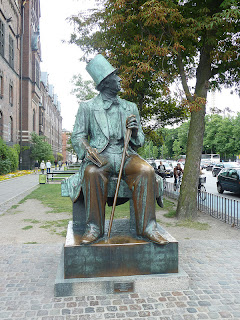