I have used "Coming Home" in the title but the 17th arrondissement is almost as much home as is Ottawa.  We have become expert "flaneurs" and really enjoy the area.  It can only take five minutes to walk to the Metro but I cannot imagine why anyone would want to do it in such short a time.  There is always something to stop and look at or little scenes to enjoy, a small kid being towed along on his scooter by a parent in a hurry, a couple of dogs waiting anxiously at a food shop for the mistress to come out, somebody selling something different on the street.  This year it was mattresses, furniture and umbrellas, in the past it has been oriental carpets and for several years a man had an incredible display of bras - never realized the women of Paris had such full figures.

One thing is certain is that we will be back because we have already made a reservation for New Year's Eve 2013 at Aux Isles de Marquises.

Mary, Pat and I left the apartment as planned, knowing that the Air Canada flight to Toronto was going to be delayed by 30 minutes.  Better to wait at the airport than in the apartment.  The metro line 2 came as we got to the platform.  Trains were running on a 2 minutes schedule and there was a little delay as we caught up to the train ahead.  We successfully ran the gauntlet of the RER ticket barriers at La Chapelle - only one was out of order this morning.  Knowing that RER line B to the airport goes from platform 43 we went straight there to find an airport train running straight in.  It turned out to be a fast train so we made good time to the airport. In fact we made it to the airport in 45 minutes straight from the apartment passing the now familiar locations - Sacre Coeur, Les Plaines Stade de France, Le Bourget marshalling yard, Aulnay Sous Bois with its tram trains to Bondy and the Exposition Centre.

The airport wasn't that busy and we had an easy walk to the Air Canada check-in.  Being early there were a lot of Air Canada smiling employees to help us.  One young lady insisted on doing all the work with the check in machine (we had checked in yesterday but needed to print boarding passes and Mary's baggage tag - I had just a carry-on).  The service people in Paris, in general, seem to be well trained and very polite.

There was then a long wait for boarding an uneventful flight.  We passed through the immigration formalities quite quickly in Toronto and had an hour or so to wait to board our delayed flight to Ottawa. It had to be de-iced.  The flight to Ottawa was uneventful.  It turned out that several flights arrived in Ottawa at the same time so we had to wait some time for Mary's bag.

OC Transpo was its normal nasty self.  It was well below freezing and there was a warm 97 bus waiting the 13 minutes for departure.  The driver was skulking inside and made us wait some time before we were allowed into the warm.  The trains on RER line B are very old and rattle along alarmingly at times but at least they are clean, run to schedule and provide some decent protection from the weather.  I hate to think what the Ottawa LRT system will be like if it is run by OC Transpo.

This is the last post for this blog.  Entries for 2013 will be made in a new blog http://colinchurcher2013.blogspot.ca/
Posted by Colin Churcher at 8:04 AM 6 comments:

We had a long walk along rue Miromesnil largely deserted until we came to the Elysees Palace and the Champs Elysees.  The Champs Elysees was its usual nasty tacky self with lots of silly things for sale to unsuspecting tourists.  The Place de la Concorde and the Tuileries were little better but there was a little more sanity around the Jardins du Palais Royal and the Gallerie Vivienne.
We then took the metro back from the Bourse and bought a still warm baguette to help us eat up the spare cheese we have to consume or ditch by first thing tomorrow. Of course Pat broke off the end to eat it on the way in and started raving about it.  It was warm and soft in the inside but crispy on the outside.  We all started eating away and there was scarcely anything left by the time we reached the apartment - a block away.  The Epoisse is fighting to the last.

I took a look at Gare du Nord this morning while Mary and Pat went back to Le Bon Marche to get some housewares.


Gare du Nord was pretty busy and security was tight.  A group of SNCF police took on a homeless woman who made a squat in the concourse.  They made her move on but also she had to pick up all her cardboard bits and pieces.  She was really lighting into one of the uniforms and giving him what for - to the amusement of the rest.

This afternoon we went to Parc Montsouris which is on the other side of town but easily accessible through RER line B to Cite Universitaire. 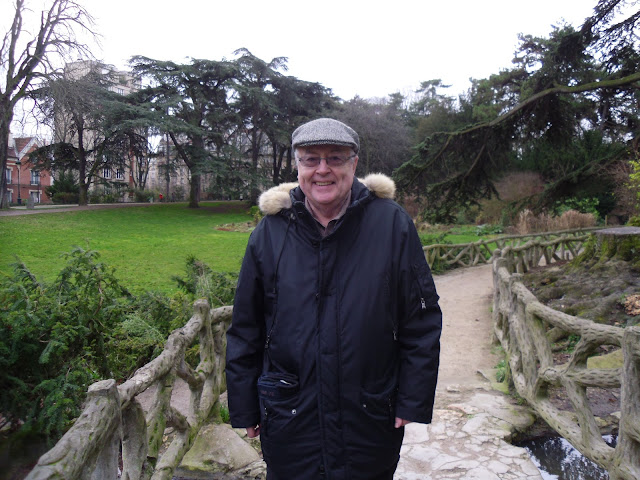 We had a special meal at Aux Isles Marquises which is where we have been for December 31 for many years.  We were greeted like old friends by Madame and her husband, the chef, came out specially to greet us.  The service was well paced and the food excellent.  We started with a bottle of champagne and switched to Saumur Champigny for the meat course.

We tucked right in to the fois gras so quickly that we didn't think to take a picture
The Paris transport is free today from 1700 until midday tomorrow.  Getting across to the restaurant, although it was the other side of Montparnasse, was very easy.  The metro was crowded but not frantic and the crowds were subdued.  It was raining when we came back so that should damp down things on the Champs Elysees.  It was good to renew acquaintances at Aux Isles Marquises.

I met Mary and Pat at the Gare de Lyon for lunch.  They had spent the morning at the Musee D'Orsay enjoying the exhibit of Impressionism and Fashion.  The restored interior is very attractive. I took a roundabout route via the Vanve market, Mouffetarde and the SNCF Gare de Bercy. 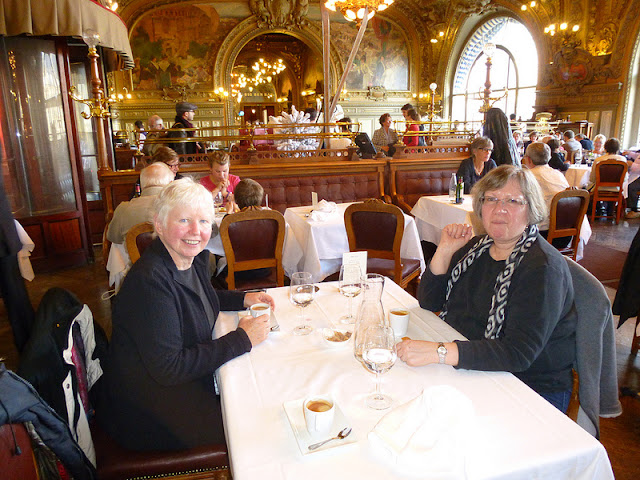 The food and the service were superb.  The waiter was friendly but busy but he was there when we needed him.

We started with poached organic egg on mushrooms in a sauce (Mary); Lyon sausage (Pat); hare in a canneloni shell with a rich spice (Colin)
For the plat there was duck shepherds pie (parmentier) with a rich sauce (Mary and Colin; Salmon (Pat)
The dessert was profiteroles (Pat); Mille feuille au citron (Mary); baba au rhum (Colin)
One and a half bottles of Cotes de Bourg.
We then made an abortive trip back to Sevres Babylon to find Le Bon Marche was closed than back to the apartment for a rest.

Posted by Colin Churcher at 2:26 PM No comments:

We went all over the place today starting off at Notre Dame.  I was horrified to see the ghastly structure they have built in front of the church to celebrate its 850th anniversary.  It is impossible to get a good view of the exterior.

We went early but the place was still quite busy.  There was then a walk to Hotel de Ville where Pat rented skates for a spin on the ice.

Click above to see Pat skating
Place des Vosges and then via the National Archives to the Pompidou Centre with the enormous line ups.
A quick trip across town to admire St. Sulpice which has been well restored outside.

The organist was practicing.  It was an unfamiliar piece, probably J.S. Bach.  Click below to see three videos and hear the organ.


We then walked along to Le Bon Marche on Sevres which is a large departmental store with lots of staff and few customers.  The staff was very pleasant making eye contact and smiling "Bonjour."  There is a large epicerie right next door which was filled with interesting things.

We had a snack at a brasserie right outside.

We then went across town to the Madeleine to visit the Apple store.  Mary bailed out here and left Pat and me to try to see the window displays on the Boulevard Hausseman.  It was very very crowded and very very unpleasant and we got out to the metro as soon as possible.

We set out to go to Le Relais de Venise but it was full so we went round the corner to a low end place.  The waiter was very pleasant and the food was good but not exceptional. A man at a table not far off was robbed.  He had taken off his jacket and put it over the back of his chair, leaving his wallet in the inside pocket.  Someone at the next table took his wallet.  That is a good lesson and is why I keep my wallet, cell phone and camera in front zip pockets in my pants.

Posted by Colin Churcher at 4:00 PM No comments:

We went out to Charles de Gaulle airport this morning to meet Pat Hurley who arrived 8 minutes and a day late because of bad snow conditions in Windsor, Ontario.  We quickly returned to the apartment using RER line B and the first order of business was lunch at Bistrot d'I-D.

To start we shared a house terrine.
Mary - scallops with a creamy risotto.
Pat - wild boar with fries
Colin - Magret de canard with scalloped potatoes.
The meal was excellent and our server was pleasant, friendly and attentive.
After a short rest we decided to walk along to the Square des Batignoles

After a walk through the park we decided to catch the bus to Gare Saint Lazare.  There were some homeless drunk people at the bus stop.  The woman recognized my Stade Francais rugby hat and we started to talk about rugby.  They thought the best team was the New Zealand All Blacks but they were pleased that they were beaten by England recently.  It was a good job the bus came when it did because I am sure the bus shelter was about to blow up from the accumulated alcohol fumes.

We admired the recently completed main hall at Saint Lazare then walked back past the music shops on rue de Rome.

In the evening we took the bus to the Trocadero.  I sat next to an unshaven security guard named Claude who was taking up two seats.  He was from Brittany and couldn't understand why I liked Parisians.  He was going to work on the night shift at the museum at Trocadero.  We arrived just in time to see the sparkling lights on the Eiffel Tower then back to the Etoile to see the lights on the Champs Elysees.  The metro took us to the Montmartre funicular again just in time to see the next session of sparkling lights on the Eiffel Tower.  We were beginning to flag so a short walk around Montmartre and we took the funicular and metro back to the apartment.