The NSB is shut down north of Oslo for the entire summer.  We had to take a bus to Honefoss which is about an hour out of Oslo. In this organized chaos it took 8 buses to bring everybody for the train. It was a good job it wasn't raining because a lot wouldn't have had cover.
We had seats in the nursery car. This has an area for kids where they can climb around and crawl through tunnels. This is great but I wonder about kids falling down. 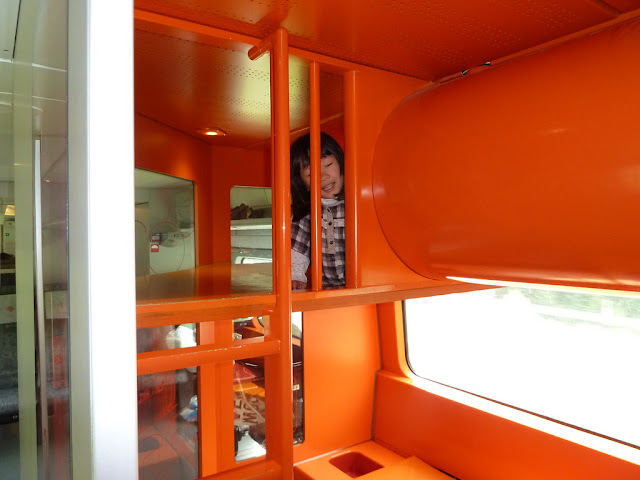 Much coniferous forest but there is some grain farming and fruit trees. There were several tunnels on the road and the railway had a lot as well.  The train ran very smoothly with continuous rails and well maintained running gear.  Plenty of room in the cars even though practically every seat was taken.

As we climbed higher there were isolated patches of snow.  The trees were smaller. Saw a gas station with grass growing on the roof. At Finse we reached the highest station on the line - 1222 metres.
Myrdal was cold and bleak with patches of snow and much bare rock. We changed here from NSB to the Flam Railway, reputed to be the steepest standard gauge line in the world.   It uses an electric locomotive at each end.
There were lots of tourists milling around when the train came in so there was a fair amount of juggling for position. Some had to stand although there was probably space at the end of the train. The line is quite spectacular with many views of waterfalls and valleys although not as spectacular as the guidebooks would have one believe.  There is a good commentary in three languages on flat screen tvs set throughout the train.  Murdal was cold and wet.  Flam was warm and wet.

Flam was overpowered by a hideous large cruise ship.  One day last week there were two such monsters docked.  One hates to thing what damage they bring along with the tourist revenue.

We quickly found the ferry to Balestrand and there was time for a coffee and quick visit to the Flam Railway museum. The ferry was very smooth and had good comfortable seats.  The views along the fjord were great and each waterfall seemed better than the last.
A large number of people went ashore at Balestrand and many went for the green Volvo which carried our bags to the hotel. Our room is delightful with a wonderful view across the fjord. It is very quiet and sounds carry a long way.
Balestrand is very small and we can have a lazy day tomorrow.

We went into the largest hotel in town, the Kviknes, to make a reservation for the smorgasbord, dinner tomorrow.  It is reputed to be the largest wooden building in Scandinavia.  Unfortunately they have built a block of barracks and cater to the tour buses.  We saw five tour buses there and are glad we were unable to make a reservation because they were full one day.  The Balestrand Hotell, where we are staying, is small, quiet and we have a wonderful balcony.

Dinner was at one of the two restaurants in town.
Troll soup - mostly mushroom - they go into the woods but trolls are hard to find this time of year.
Grandmother's Norwegian meat balls/Elk Burger and Reindeer sausage.
The fellow working there had a Lancashire accent.  He agreed that he had been to the University of Icky Thump but was actually born in Sierra Leone.

We went to sleep with the curtains open for the view over the fjord.

Click below to see pictures of the Flam Railway
Posted by Colin Churcher at 4:11 AM