Today was the first day using our Eurail pass.  We took a Danish ICE train to Nykoping.  This looks like the German high speed trains but is a diesel set.  This train was going through to Hamburg and would use a train ferry to get to Germany.  At one point we crossed a long road and rail bridge presumably passing from Zealand to Lolland.
From Nykoping to Maribo we used a two car diesel set of the Lollandbane local railway.  They accepted our pass without question although there was no first class.

It was difficult to get information at Maribo until we finally found a small notice in Danish and German saying that the Museumbane left from platform 2.  Just about then we heard a steam engine whistle and a small train backed into platform 2.  The conductor spoke quite good English and confirmed the timetable and other details. 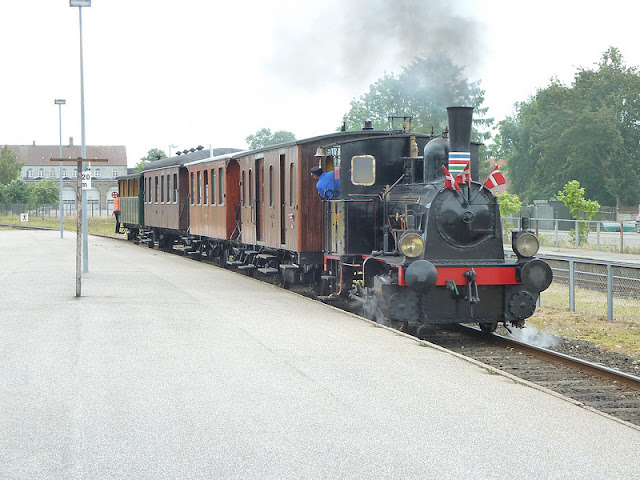 There was time to go into Maribo to get something to eat and drink at the only fast food place open then get on the train.
The conductor was selling Edmondson sized card tickets from a wooden pouch which was hanging around his neck.  Modern railways don't use these card tickets any more.  The power is a very small 1903 built 0-4-0WT which only has a steam brake.  The train of four wheeled coaches has continuous brakes but they use hand brakes.  It backs out on the main line for a short distance to the museum siding then runs forward to Bandholm.  The pace is very slow which gives an opportunity to admire the scenery - market gardening and forests.  At Bandholm there is a pause for the engine to take water and the passengers to visit the small museum and then we were off on the final part the Bandholm Harbour.  It wasn't much more than 200 yards and the track just ends at a road.  It is close to the water and we marvelled at the number of swans - at least 40 that we could see. 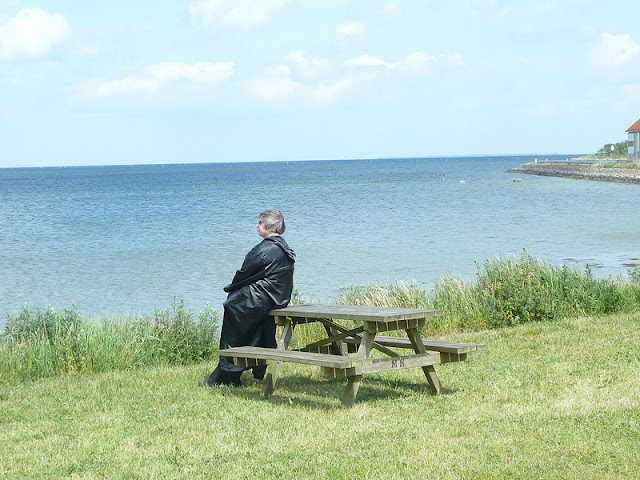 A short burst on the steam whistle and the half a dozen or so passengers scurried back to the train which backed up to Bandholm.  The engine ran around and we ran back to Maribo where we reversed into the platform after the train to Nykoping had left.  The engine runs around the train on the main line.

With about 45 minutes to wait for the next train back Colin went into see what there was to see in Maribo.  Not much happening on a Sunday afternoon.
We caught a diesel railcar back to Nykoping where a diesel powered double decker train took us back to Copenhagen.  First class on the top level is comfortable.

Click below to see a slide show of all pictures of the Maribo Steam Railway.

Posted by Colin Churcher at 2:32 PM