We took the tram to the Vasa Museum this morning.  The Vasa was a large warship, the first in Sweden with two rows of cannon which sank 20 minutes after being launched in 1628.  It was raised in 1961 and has been painstakingly restored.  It is enormous and impossible to photograph completely.  The light inside the building is very low because of the potential damage to the old timbers.  The initial stage of preservation has been completed but there is a great need to ensure that it will last for a long time.  The strength of the wood has dropped by half and research is necessary to ensure the wood can be permanently preserved.  Already the 5000 bolts put in initially to replace those that had rusted away are beginning to corrode and stainless steel bolts are being experimented with.

We saw first the video presentation which gives good coverage of the raising and restoration, then we took a guided tour which was also very informative.


The museum was very absorbing and took up all the morning.  We had a quick look at an icebreaker and a light ship then went for a light lunch. 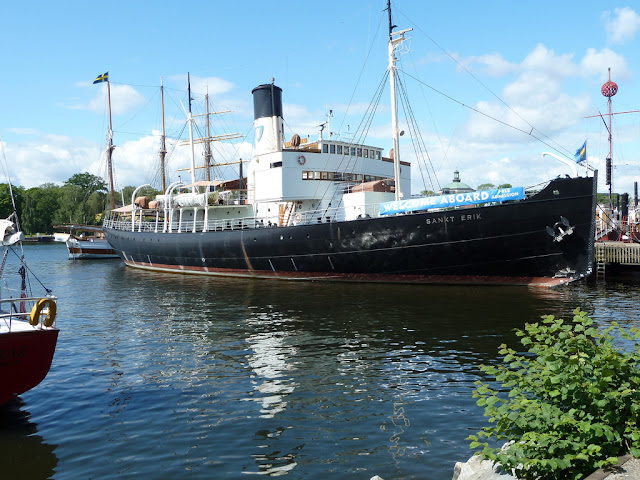 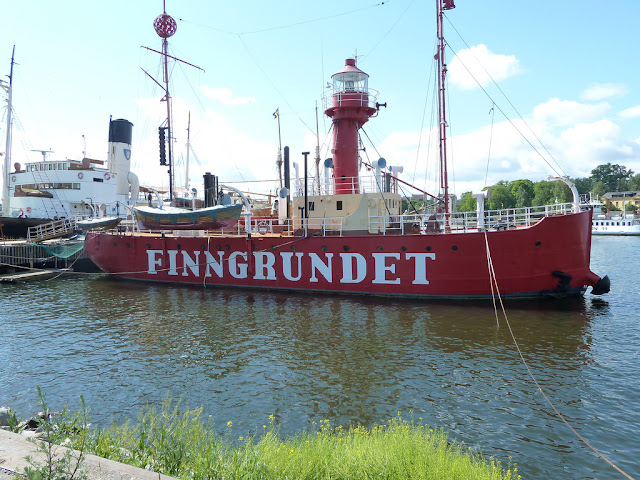 We had lunch at the restaurant in the Spirits (i.e vodka) Museum.  It was possible to get vodka shots and we tried the classic Absolut and Elderberry.

We couldn't find any sign of the vintage trams so this afternoon we decided to go a little further afield and ride the Lidingobanan.  This is an old electric railway that uses 1950s vintage electric cars and trailers.  A good description can be found at:
http://lidingosidan.se/upplev-lidingoe/3927/lidingoebanan-the-lidingoe-tramway

The line is single track with passing sidings, most with spring switches.  It passes through forested areas as well as residential and light industry. Just after the connection with the Metro there is a large bridge over the water to the island.  This has a curved connection at the eastern end, similar to the New Westminster bridge over the Fraser River.  The north part is now a footpath but it may have been the beginning of a second line on the island.

The weather was threatening and rather than look for a ferry to return us to Centralen, we took the first train back and T bana back to the hotel.  This evening was bright so we went to take a look at the island of Sodermalm, just to the south.  A short subway ride brought us to this area which is said to resemble Brooklyn's ShHo area.  In the main it seems to be an older area in which people live and work with nothing very special about it.  There were some attractive older buildings and the views across the water were good.