It rained heavily in the night and was still raining when we walked over to catch the 0804 to Basel.  Mulhouse seemed like a better bet today. The clouds lifted a bit by the time we has reached Basel there was sun by Mulhouse and the weather was pretty good all day. Even in the centre of Bern we saw sheep grazing down by the river.
We walked into France at the Basel station and found our train to Mulhouse.  It was made up of old Corail stock painted in Alsace regional colours but it rode well. At Mulhouse the tram stop is right in front of the main station entrance which has recently been renovated.  Everywhere we go we find he buses and trams right outside the main railway station.  Why is this such a foreign concept in North America? I struggled with the ticket machine and finally made it print out a couple of tickets. A bit of a queue had formed and I apologized profusely but everybody was very kind and polite.
The ride out to the museum was delightful as much of the route is on grass or old style cobbles. France has a very different feel to Switzerland.  The land is not so intensively used and it is slightly less well cared for but the people are very polite and it is a pleasure to be able to converse with them.

We caught a tram back into the centre of the city.  There is a four platform tram interchange here and many people.  It seems the high end shops are lined along the tram routes.  The tram is an integral part of the streetscape and the same sort of social interaction will not be possible in Ottawa when we bury our stations deep underground.
I managed to haul Paul away from an orgy of tram picture-taking into a restaurant located right by the tram stop. We had half a litre of an excellent red wine, Paul had pizza while I had the menu du jour which was a tomato gaspacho and a plate of sausages with small pasta and ham and sauerkraut(!) This was a speciality of this part of Alsace and so I thought I would try it.  It was pretty good and the sauerkraut was yum-my!

An old couple came in and sat at the table next to us.  The staff knew them well and greeted them warmly.  They had the daily special and a quarter litre of rose wine.  It was good to see the staff treat them like old friends. 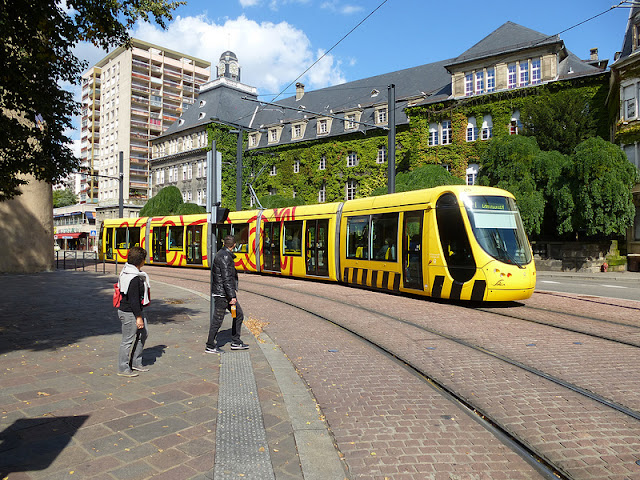 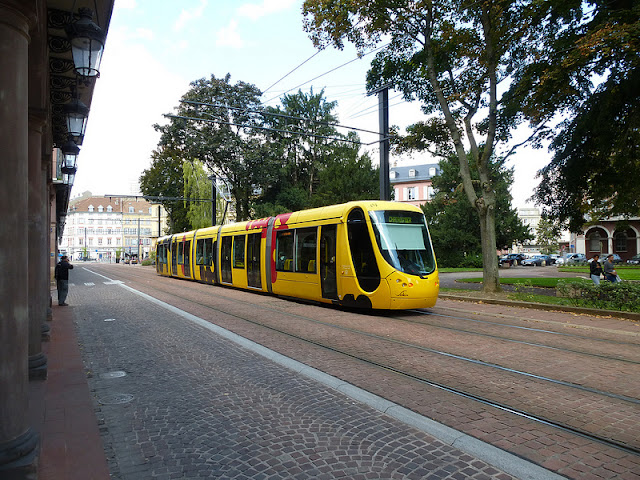 We then walked back to the station noting that the streets contained sidewalk cafes, grass, flower beds, trees, trams and just a few cars.  The yellow trams show off the trees and shrubs to good effect.  The areas where the tram tracks have been grassed are particularly attractive,  like going through an urban park.
We had to wait half an hour for a train to return to Basel because of an accident further to the north.  Basel was very busy and we caught a tram into the Marktgasse which has a number of interesting stalls, including one selling hot dogs where the bun is impaled on a stainless steel spike to make a hole for the dog.  Free wi-fi is available in some of the trams.
We took another tram over the river into Germany then returned to the market area and its pedestrian streets.  Again, the high end shops are along the tram routes.
The return to Bern was in a first class quiet car.  It was certainly quiet but nowhere near as much fun as the noisy one yesterday.
Click here to see all pictures of Mulhouse trams
Click here to see all pictures of the Mulhouse Railway Museum
Click here to see all pictures of Basel
Posted by Colin Churcher at 2:45 AM