We had reservations on the TGV leaving at 0859 for Reims (not 0900 - SNCF doesn't want to help the customers)  There was great confusion at Gare de L'Est and several of the earlier trains were delayed.  Of course SNCF leaves it to the last minute to tell passengers which platform the train leaves from so we had a mad dash right over to the other side of the concourse to platform 27 (crossing many streams of commuters trying to get into the metro).  We found our seats and at 0859 a voice announced that there would be a delay because they didn't have a train crew.  The railway must have known before this but they are so arrogant that they don't bother to inform their paying passengers.  We finally left almost 15 minutes late and didn't make up any time to Reims (downtown).
We found the tram stop at Reims Gare and caught the first gaily painted tram out.  The ticket machine was easy to use and we made good use of a 24 hour ticket.  We went to Comedie where the system changes from the underground to overhead wires.  The lady tram driver stopped at the car barns where a man was waiting to take over.  As she came out of the cab there was a short delay while the two kissed.  It was then on to the end of the line at Gare Champagne TGV. This is built in an open space with just the TGV station and a hotel.  The last kilometre or so of the tramway is single track but the roadbed is in for a double track and locations for two stations have been set aside.  What a novel idea to put a tramway in green fields so the area can develop around public transport.

Speaking to the tram driver, I found out that the changeover between pantograph and ground supply has to be done manually.  However, all he has to do is to is to make sure the tram is stopped then push one button.  He really liked the different colours of the trams and the front shaped like a champagne flute is very distinctive.
On the way back into town we could admire the long stretches of grass between the tracks and enjoy how smooth it was.  The rails are continuous streetcar type rails, even in the grass sections.
At Opera we walked to the cathedral.  It is in bad shape outside and the interior was dark and dingy.  Not a pleasant place to linger.
We found a restaurant which had a three course meal for 13.90 euros.  It was well frequented by locals which is always a good sign.

There was time to see the rest of the tram route before the champagne house opened and we went all the way to Neufchatel.  This is very much out in the sticks and we caught the same tram back into town.

The visit to Mumm's Champagne House was interesting,  The cellars are impressive for their sheer size.  One corridor in the chalk was over 300 metres long. 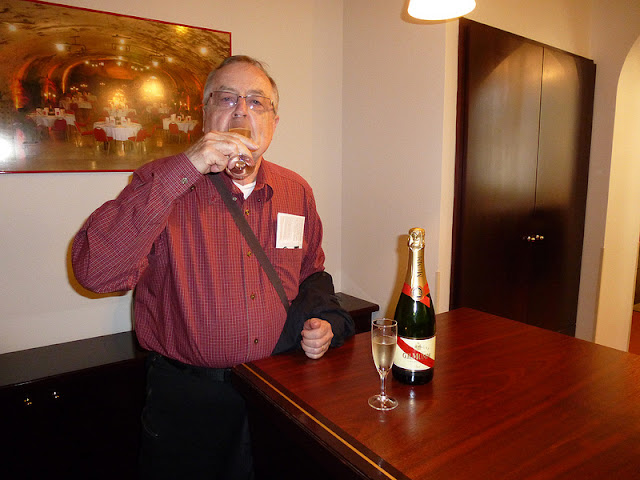