Monday 24 September - Bayeux and Caen - Its a bus:its a tram:its a trolleybus - none of the above

We went down to Saint Lazare this morning to catch the train to Caen and Bayeux.  It had rained heavily in the night but was just cloudy and windy.  Walking down rue de Rome I noticed a new store among the violin and other musical instrument repair shops - a scooter shop.  Sure enough there is a shop devoted entirely to foot scooters and accessories.  I was staggered to see that most started around 380 euros and up from there.

The train to Caen was pretty well on time, old Corail stock which went like the wind and rode quite well.  At Caen there was mass confusion particularly among the North American tourists each with enormous cases.  The train to Bayeux was ten minutes late but even so some people missed it because they couldn't figure things out.  It was raining at Caen but the clouds had lifted by Bayeux and we had a little sun along with very high winds.

Knowing the way, we were soon at the tapestry location.  There was a large crowd ahead of us but they all dutifully followed the audio guide so we were able to see the details of the tapestry and follow the jokes.  The audio guide is one of the best I have come across.

We went along to our favorite restaurant but a dozen or so people were just filing in so we decided to look for somewhere else.  We found a three course meal for 14.50 euros which was quite reasonable. The cathedral was sterile but the rest of the town was quite interesting.  Although it was practically destroyed during the Normandy landings it has been sympathetically restored and has a pleasant feel.

The return train to Caen was also ten minutes late. At Caen we investigated the strange "tramway" they have installed.  It is rubber tired and runs on a special road surface.  There is a rail in the center which conducts the power which is picked up from a pantograph.  The driver has to steer it round curves but it seems to go by itself on the straight.  It was extremely rough riding and there isn't too much room inside because of the space taken up by the wheels.  It seems to have all the disadvantages of bus and tram and the only advantage would appear to be that it will go up steep grades well.  Caen was also heavily damaged during the war but it is a sterile place and we didn't feel the need to linger. 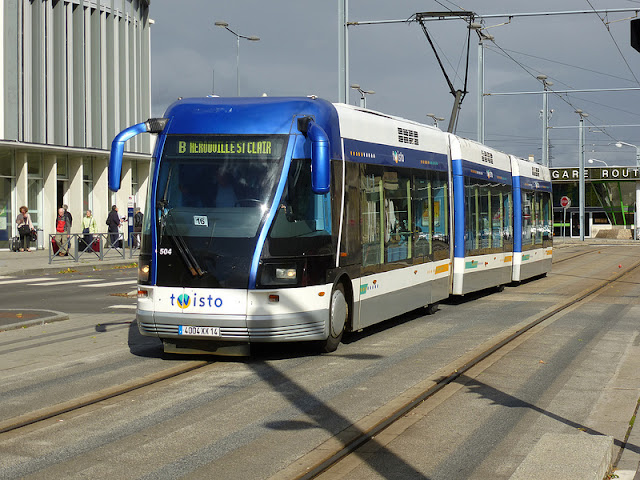 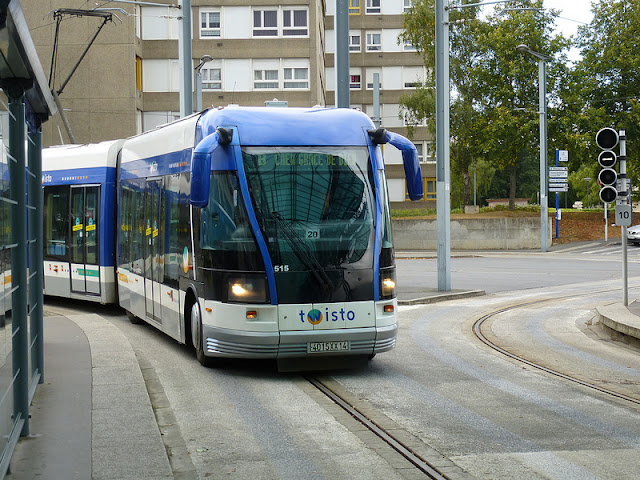 We had to carefully choose our seats on the way back to Paris as most of the first class was reserved.  We were stabbed severely at Mantes la Jolie but the engineer certainly booted it afterwards so that we were only about a minute late.
Click here to see all pictures taken at Bayeux
Click here to see all pictures taken of Caen trams
Posted by Colin Churcher at 2:48 PM