Breakfast at the hotel is pretty good - there is even bacon and eggs.
0800 Bern to Biel was a BLS electric suburban train but with some first class. Cool first thing but sunny with a clear sky.
0853 to Neuchatel.  We were just time at Biel to see an Aare Seeland tram.  We decided to come back later.  Grape vines on the hillsides overlooking the lake.
0932 to Les Chaux de Fonds and through to Le Locle. The suburban electric provided us with good views of Lake Neuchatel as we climbed up into the Jura.  We reversed direction at Chambrelien and there was some mist but by La Chaux de Fonda we had climbed above the mist and it stayed sunny and hot all day.

The same train went through to Le Locle where the narrow gauge electric tramway to Les Brenets was waiting. This is a delightful trip of just 7 minutes.  I stood beside the driver and enjoyed the tunnels and  pleasant fields and forests.  We passed a farm with large herd of deer.
The train comes straight back so we were in good time for the next leg to Les Ponts de Martel.  All trains arrive in La Chaux de Fonds in the five minutes before the hour and they all leave again in the five minutes after the hour - every hour.  Six trains of three companies and two gauges - all connecting with each other.

The train to Les Ponts de Martel is another narrow gauge electric tramway running through delightful scenery.  Clear skies. Many cattle farms in the valley with forests on the sides.  We passed the Cartier watch factory.  La Chaux de Fonds is a watch making town and has a good museum.

Back to La Chaux de Fonds and quick transfer to CF du Jura to Glovelier. Street running through La Chaux de Fonds with a five car passenger train.  At both Noirmont and Saignelegier there were several ng cars transporting sg ballast cars.  Lots of work being carried out.  I finally traveled over the section of line between Saignelegier and and Glovelier.  Last time, with Bill and Martin, we were put into a bus because of track work.  This time we rode round the sharp curves and I was surprised to see a reverse of direction, two tracks and a double crossover, to lose height to get into Glovelier.

Glovelier was busy as the 0-4-4-0 mallet steam excursion had arrived before us and the engine was taking water.  The excursionists were having a fine time relaxing in the sun with beers and wine.  There was time to relax and have a beer.  A lady at the concession had trained her small dog to bring the customers' money to her although I don't know what she did about the change.
We watched the steam train leave and then caught a train to Delemont and on to Biel.

There was an Aare Seeland tram leaving for Tauffelen so we decided to catch that and wait for the next train to Ins, 30 minutes later.  This line is a roadside tramway for practically the whole way to Tauffelen with only occasional views of the lake - at times the cars and cyclists seem to be coming right through the windows they are so close.  Not a great deal to see here although the entire railway seems to have been rebuilt, ballast, (welded) rails, ties and overhead equipment.

From Tauffelen we ran through fields, woods etc. although the line seems to run along boundaries rather than diagonally across.

At Ins we caught a BLS train into Bern.

The SBB ticket office in Bern was very helpful and we were able to buy the supplementary tickets we will need tomorrow to ride the MGB from Visp to Zermatt and the Gornergratbahn.  (Turns out that they had completely screwed up the tickets but we didn't know that until the next day.)

The next order of business was to get tram tickets and sample the Bern trams.  A young girl was watching us looking at the map and asked if she could help.  I asked her what was her favorite tram route.  She said the 12 was the best but this is a trolley bus.  Her next favorite was the 7.  As there was a 7 right there we went out and back on route 7, took pictures from the bridge then had dinner.  After that we took the number 9 to the end of the line and back. 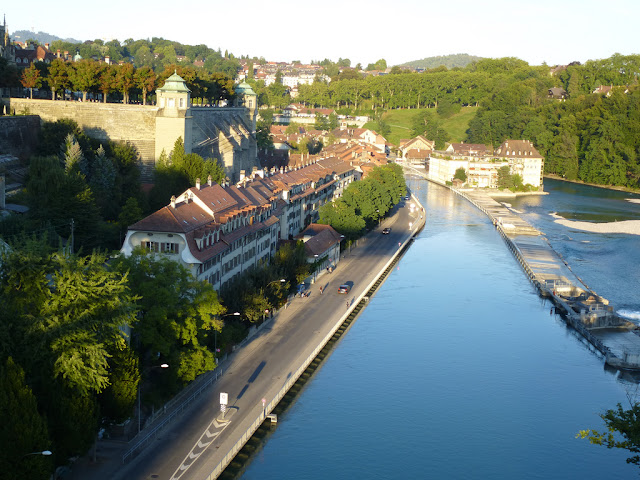 Click here to see all pictures of the Jura narrow gauge railways
Posted by Colin Churcher at 1:31 AM