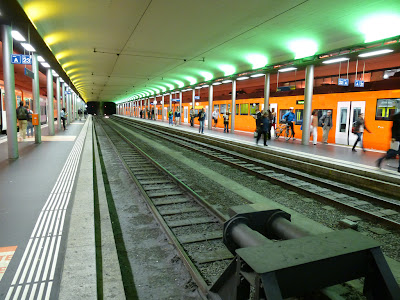 The Bern suburban station is a neat four-track on narrow gauge underneath the main station.  The security guard was interested my locomotive book and told us this station handled 22 million people annually.

The 0807 to Visp was 4 minutes late leaving.  At least we were able to ride in the top deck.  We made up the time by Visp and there was a quick transfer to the MGB train to Zermatt. It seems the SBB people in Bern didn't issue the right supplement tickets for Visp to Zermatt and Gornergrat.  This resulted in a long conversation with the very friendly conductor who made a phone call to Zermatt then took us to the ticket office where a correct ticket was issued and I got a refund. The two ticket agents and the conductor apologized profusely even though it wasn't their fault.  We then had to go to the Gornergrat ticket office and get a reduced fare ticket there.  There is a lot of French used around here.  The Gornergratbahn uses a smart card which opens the turnstiles.  Pity OC Transpo can't make their cards work.  Mind you the ticket prices are significantly higher so there is probably more incentive. 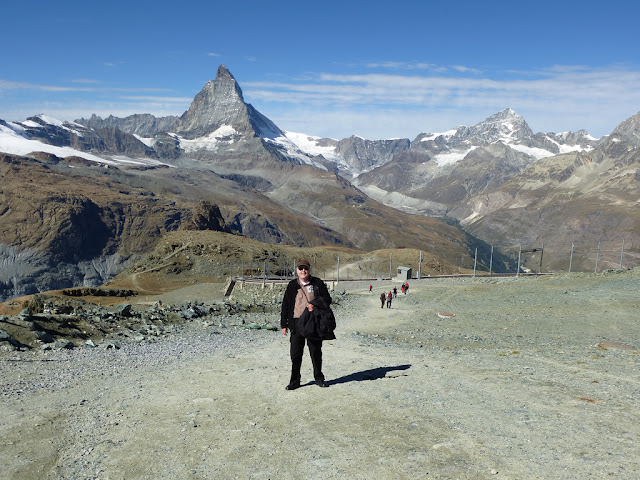 The trip to Gornergrat was in bright sun and it was hot at the top. We looked around, took pictures and caught the train back 30 mins. later. I bought a new Swiss Army knife which only cost CH17 (about $17).  It will replace the one I couldn't bring in my carry on.  I will leave it in Paris and bring it back in January in my checked baggage.  I feel mean at getting a new one with more blades and the other one is only 40 years old.  Zermatt is only accessible by public transport and the railway runs a shuttle service.  It has a great number of construction cranes so business is evidently good.


The train down was pretty empty and we sat right up front beside the driver with excellent views ahead.  There were many hikers - it took 3 1/2 hours to climb down according to the signs.
At Zermatt we had about 4 minutes to get the train to Visp. We managed this with time to spare.  The streams and rivers are all milky white.  The sun shining in and the comfortable seats were conducive to dozing.  The MGB trains are very comfortable and quiet.  Although the line is narrow gauge the rails are all welded.

The train to Montreux was actually two minutes late leaving and the computer was still upset that we were a minute late into Montreux.  Montreux felt like a fun fair and was not as pleasant as I had remembered.  After a beer on the promenade we took a train to Lausanne.  An easy stroll to platform 1 and the train to Bern was just rolling in.  We found two seats in the top deck.  The double deck inter city trains are Paul's favorites.


Dinner this evening was al fresco Italian.  It was very pleasant.  The sounds of the trams in the distance added to the pleasant buzz of people eating.  No private vehicles are allowed here so all we could see were trams and trolley buses.