I had made a reservation for lunch at Le Pied de Cochon, www.pieddecochon.com/ near St. Eustache in Les Halles district.  It was a lovely mild sunny day and we decided to walk.  The first surprise was the amount of commerce on a Christmas morning on the rue de Levis.  The first thing we saw as we rounded the corner into the street was a man selling bras out of a suitcase.  Au uplifting experience.  As, Steve, my brother-in-law said on the phone later on in the day "Its not like that many people would drop everything and rush out Christmas morning to buy a bra."

Knowing the Parisien fondness for baguettes we were not surprised to find four boulangers open in the one block but there were also greengrocers, butchers, florists and the charcuterie as well.  There was a full range of cooked and rotisserie items available.

We crossed the street and looked in the window at Lenotre, chocolatier/patissier.

Our route took us past St. Augustin's church and La Madeleine. The light was very good.

We have been to Le Pied de Cochon many times.  We were on the second floor (third level) and there was another floor above ours.  The food was good but very slow in coming to the table.  We started with a coupe de champagne and had the special pate de foie gras de canard avec figues.  Mary then had turkey with stuffing and I had the grilled pigs trotter which was, of course, with lots of bones but the meat and crisp skin were worth the trouble.  This was with a bottle of Chinon rouge, a Loire wine which is a favourite of ours since we visited the village in 2002. 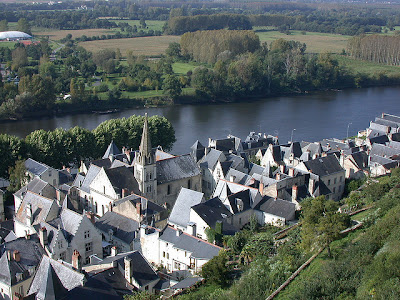 We ordered dessert (buche de Noel and apple sorbet with Calvados) but it took a long time to come.  After 25 minutes I told the waiter to either bring it or bring me the check.  Everybody then proffered profuse apologies and we were given complimentary glasses of champagne.  This didn't alter the fact that the two tables either side of us had received similar treatment but were ignored because they didn't complain.  The Maitre D' was offering champagne to another table because of slow service.

We walked back to La Madeleine for a free organ concert.  The Jardin du Palais Royal was very pleasant with just s few people sitting enjoying the mild weather.  La Madeleine is very impressive but the choice of music was very poor indeed and neither of us enjoyed it.  (Marcel Dupre (awful), Vincent Lubeck, Johann Gottleib Walther, Louis-Claude Daquin, Jean Langlais, Francois-Henri Houbart (the organist - not very good)) The organ is loud, it has to be for such a large building, but much of the "music" was cacophonous and unpleasant.  Such a pity.

It was quite dark by the time we arrived back - decided we didn't need any more to eat today.