Mary decided to go to the Pompidou Centre so I had a nice easy day.  We only had smoked salmon and white wine in the fridge so I had to go out and get some things to go with it - endive, tomatoes and salmon en croute.

The weather forecasters were wrong in that the day started off warm and bright although we did have light rain in the late afternoon.  After running my errands I went out for a short walk along the railway entrance to St. Lazare.

At this point the main line is eleven tracks wide.  You can't see them all because two are cantilevered over the sidewalk.

After five minutes of train pictures I put the camera away so I missed taking a shot of a local train with one of the long blue locomotives.  The SNCF found that these were so long that trains would not fit into the platforms so they reduced the length by taking out one coach from each crowded train.  I have wondered why the SNCF puts these locomotives at the St. Lazare end of the trains.  This way the entire trainload of passengers has to walk an extra car length to get on or off (St. Lazare is a stub ended station).  With the locomotives at the country end of the trains the turnround times could be reduced. 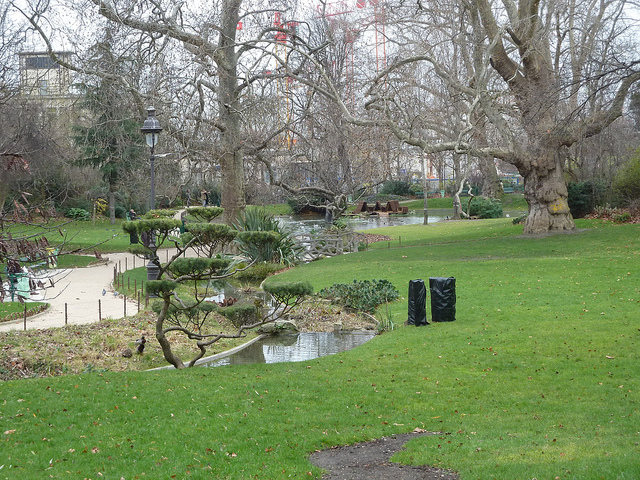 This evening we went to a concert in La Madeleine.  It was just a quick trip on the metro with a transfer at St. Lazare.  The Mendelsohn 42nd psalm was unfamiliar to both of us and we felt the choir was a little overwhelmed at times by the orchestra and the organ.
The main part of the concert was Beethoven's 9th symphony, the Choral.  This was great, the choir was powerful at times.  Some of the playing in the last movement was a little indistinct but this might have been a problem of the acoustics in the building - after all it was built long before acoustics became a science.
The audience was not particularly well behaved.  Late comers were allowed to wander around looking for a spare place.  At then end, the only people standing up were those who wanted a better view of the performers.
Getting back to the apartment took 25 minutes from the top steps of La Madeleine.  We took the metro and transferred at St. Lazare.  We had to wait 4 minutes at St. Lazare because this was the evening schedule - it would have been quicker during the day when trains run at two-minute intervals.
Posted by Colin Churcher at 12:49 PM