Monday 2 July Balestrand to Oslo via the fjords

It was rainy and cloudy this morning. The oyster catchers were out early working over the grass in front of the hotel. We left the hotel in good time and quickly found the 0830 boat to Flam. The lady at the hotel told is where it would be tied up.  The young lady crew person confirmed that this was the right boat but would we please wait while she and the captain had breakfast.  After some time the captain wandered off along the dock them went to the public toilet then came back and we went on board. There were only a handful of passengers and we left just a couple of minutes late waiting for another passenger who was a no show.
The trip back to Flam was accomplished in good time as we didn't have to pick up or set down. Flam was not busy at all as there were no cruise ships tied up.

Several large groups of orientals crowded the ferry to Gudvangen.  Rushing and pushing taking silly pictures of each other in silly poses and completely unaware of what they were looking at. To make it worse the rain came down and it was pretty cold.
The narrow fjord into Gudvangen was spectacular. It gets very narrow in places and we passed another boat at the narrowest part. 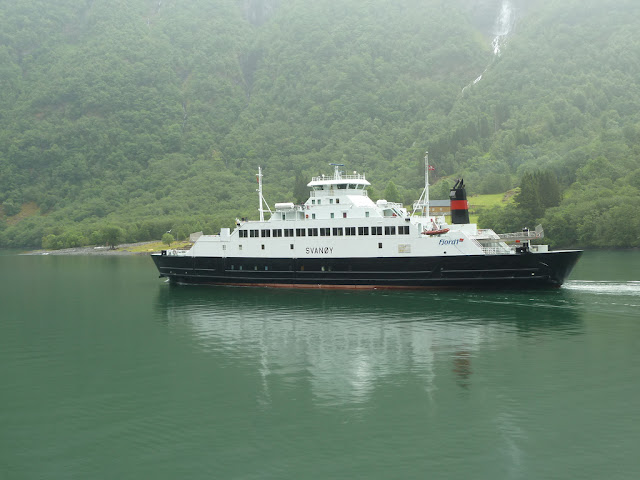 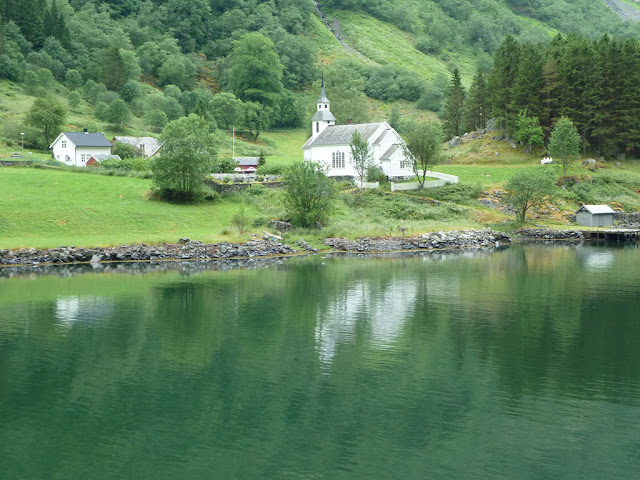 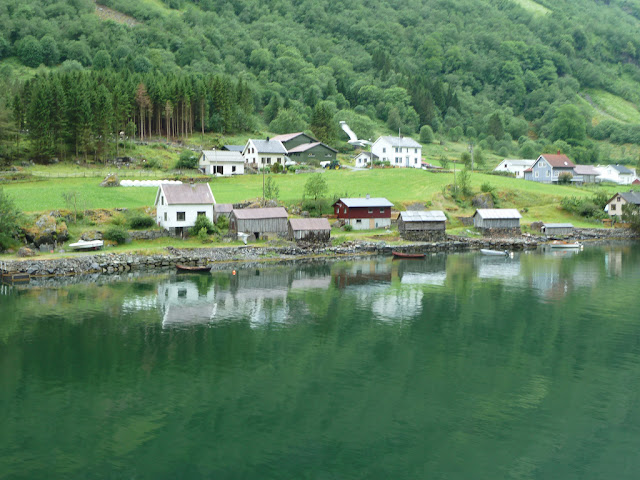 At Gudvangen we were directed to the bus for Voss which was pretty much empty.  This trip provided an unexpected surprise in the form of a series of hair raising switchbacks. The driver also made a couple of photo stops at spectacular waterfalls. This left us with over two hours to wait for the train to Oslo. We found a coffee shop where we warmed up. 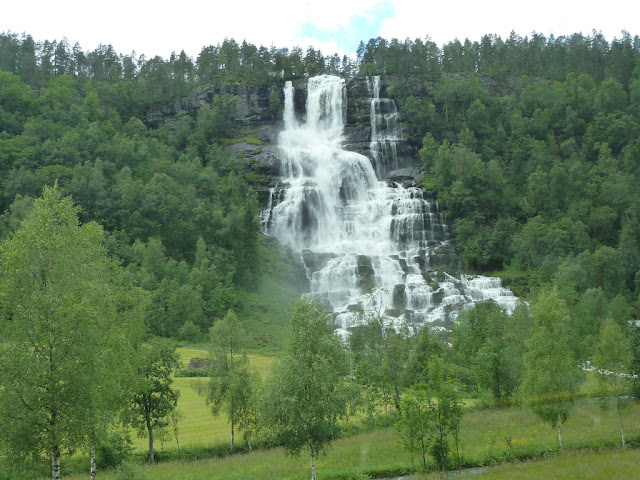 The train to Oslo arrived just a couple of minutes late and stayed that way all through to Honefoss - NSB cres have no interest in picking up time at stations.  The section from Myrdal to Finse is very high and there are evidently snow problems in winter.  There are extensive snow sheds and the railway is building more, in a couple of locations sidings have been built in the snow shed, in one case with a crossover.  This makes a great deal of sense to keep the switches snow free.

At Honefoss we had to transfer to the bus to get us to Oslo.  I ensured that we were on the first bus which was located in the exit from the platform - this had to be the first away.  The lady bus driver was very efficient and loaded the bags quickly so we were away within ten minutes of arriving.  Two women got on with dogs and we had visions of a dog fight but everything was calm.  The bus took about an hour to get to Oslo - parts of the road network are shut down for repairs.

So what could have been a very, very difficult day was accomplished on schedule (boat-boat-bus-train-bus).  It was a pity the weather wasn't better in the fjords - it was pretty good from Voss on.  The least said about the hoards of silly Asian tourists the better.

Click below to see all pictures taken at Balestrand
Posted by Colin Churcher at 10:36 AM